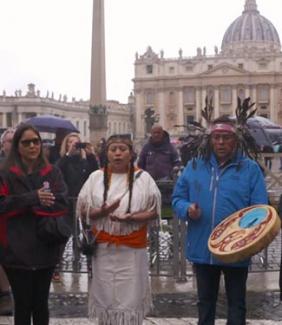 "In a Vancouver community centre, beat-filled music blares from a multi-purpose room where a group of women is dancing.

They are rehearsing for an upcoming performance in which every choreographed step is meant to make a statement.

'We are called Butterflies in Spirit, and we use dance as a way to raise awareness about murdered, missing Indigenous women and girls,' said Palexelsiya Lorelei Williams.

'I do a lot of work to end violence against women and girls,' said the 42 year old. 'When creating the group, I just thought of butterflies because like so many women they are transformative, strong and resilient.'

... It's estimated there are thousands of Indigenous women and girls who have been murdered or who have disappeared in recent decades.

According to the Native Women's Association of Canada, 'only 53 per cent of murder cases in NWAC’s Sisters In Spirit database have been solved, compared to 84 per cent of all murder cases across the country.'

While the dancers move to the rhythm, a woman known as JB the First Lady counts to the beat and shouts words of encouragement.

She's a songwriter, hip-hop artist and long-standing member of the Butterflies.

'To bring awareness to MMIWG is so important,' she said. 'These are not just a headline in the news. These are daughters, mothers, aunties, grandmothers, and we need to remember them.'"