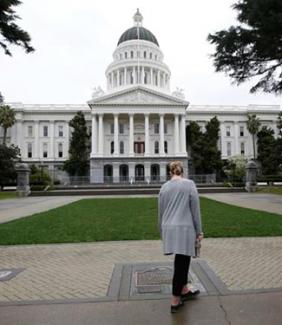 "California just became the first state in the U.S. to outlaw 'stealthing,' a slang term for the nonconsensual removal of a condom during sex.

The law, signed by Gov. Gavin Newsom on Thursday, makes it a civil offense under state law for someone to remove a condom without their partner's consent.

'For a majority of the people, it's like, 'Yeah, it makes sense that this is immoral and it should be illegal,' ' state Assembly member Cristina Garcia, who sponsored the legislation, told NPR.

'A lot of people told me, 'I can't believe it's not already illegal,' ' she added.

The California State Legislature had approved the measure without opposition.

Garcia said she was motivated to write a bill to ban the practice after reading law student Alexandra Brodsky's law journal article on the topic in 2017, which has since been credited with kick-starting a wider discussion on stealthing.

Brodsky, who is now a civil rights attorney and author of the book Sexual Justice, says that few people were talking openly about nonconsensual condom removal at the time and that victims face additional scrutiny because stealthing starts with consensual sex.

Brodsky says not only is nonconsensual condom removal a violation in itself, but it also poses the risk of an unplanned pregnancy or the transmission of a sexually transmitted infection.