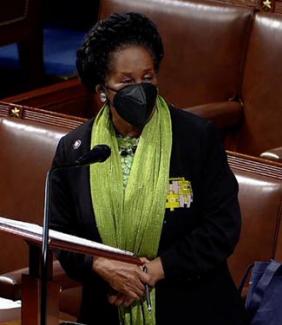 "The House of Representatives on Monday introduced legislation to reauthorize the Violence Against Women Act, a landmark bill championed by President Joe Biden that expired in 2018.

Texas Rep. Sheila Jackson Lee, a Democrat, introduced the Violence Against Women Reauthorization Act of 2021 along with fellow Democratic Rep. Jerry Nadler of New York and Pennsylvania Rep. Brian Fitzpatrick, the only Republican supporting the bill so far and who also co-sponsored the House-passed bill in 2019. Reauthorizing the legislation Biden cosponsored as a senator in 1994 has stalled in both chambers of Congress, with Republicans and Democrats introducing their own versions of a reauthorization bill. Both sides have accused each other of playing politics with the act and the sensitive issue of domestic abuse.

The new bill builds upon the previous versions of the VAWA by providing grants and support to various groups that work on issues relating to sexual assault, domestic violence and prevention, among other things.

It also aims to improve access to housing for victims and survivors and eliminates impunity for non-Native perpetrators of sexual assault, child abuse, domestic violence, stalking, sex trafficking, and assaults on tribal law enforcement officers on tribal land, according to a statement from Nadler's office."

Creating a Circle of Safety