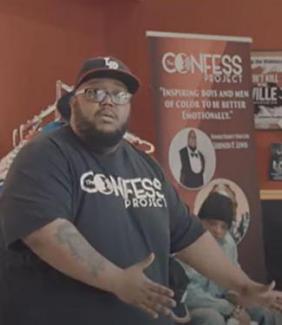 "Ray Conner traces his ambition to be a barber back to when he was a kid in Detroit. Growing up, he was abused. He watched his mother battle drug and alcohol addictions. He often went to bed hungry. When he needed to get away, he went down to A Cut Above Barber Shop on Eight Mile Road for a fresh cut and some companionship from his barber, Jessie. The relationship carried him through some of the darkest days of his life.

'Jessie may not remember me but him being my barber as a kid saved my life and it is now because of him that I am not only a Master Barber but a Barber Instructor,' Conner wrote on the shop's Google reviews a few months ago.

Conner, based in Johnson City, Tennessee, was inspired to become both a barber and a mentor for other young Black men facing adversity.

'If I can give what he gave to me, then I know I'm doing something great.' Conner told CNN.

The Confess Project Barber Coalition, a non-profit created to help Black men and boys become the best version of themselves, hosted a workshop in his town early last year. Conner immediately knew he needed to get involved. He was struck by how the organization's founder, Lorenzo Lewis, spoke frankly about his own hardships. Through the coalition, he was shown not only how to better take care of his mental health, but also given the tools to provide that same support system to his clients.

Systemic racism has created a unique need for support in the Black community, yet national data shows many African American communities are woefully under-resourced and underrepresented in behavioral health care. The past year has exacerbated these challenges. The pandemic has disproportionately affected African Americans, and the repeated instances of racial injustice and police brutality have led to an increased need for mental health services in the Black community.

The Confess Project's mission is to bridge the gaps in mental health care by providing a safe space for people to talk openly about the struggles they face. In turn, it has created a network of support among the barbers. Since it began in 2016, the Barber Coalition has spread to sixteen cities across the Southeast and Midwest and trained more than 200 barbers to be mental health advocates for their communities."