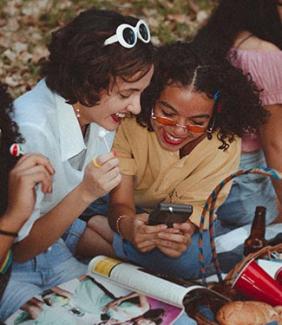 “He would tell me how pathetic I was, how I couldn’t keep up with him, how ‘ugly’ and ‘trashy’ I looked in every single outfit, and how I was the worst girlfriend to ever walk the earth.” – Kaitlyn, #NOMOREVerbalAbuse campaign

Emotional abuse, often also referred to as psychological aggression/abuse, includes a wide range of nonphysical tactics intended to control and intimidate a partner. It is one tactic in a range of deliberate behaviors that a person may use to gain and maintain power and control over another in an intimate relationship. Often subtle, tactics of emotional abuse can be harder to identify than more overt physical forms of violence, like hitting, punching, etc. Nonetheless, emotional abuse can cause similar levels of emotional distress and be just as damaging to mental health as other forms of abuse and is linked to numerous negative health outcomes (Heise et al., 2019). Often, survivors report that the negative impacts of emotional abuse last long after any physical injuries have healed. For teens, experiencing any form of abuse in a relationship is also significantly associated  with decreased academic performance and higher risk of victimization during college.

In teen dating relationships, emotional abuse can look like (but is not limited to):

“My partner constantly threatened to out me to my family – I was afraid he would do it at any moment.” – Survivor, #ThisIsDV campaign

While these abuse tactics are certainly not exclusive to teens and can show up in relationships between people of any age, young people experience emotional abuse at alarming rates. The 2014 Truth About Abuse study from Mary Kay and loveisrespect, which examined the prevalence of various forms of dating violence among teens and young adults, found that 73% of respondents reported that they are currently experiencing or have experienced emotional abuse. The Facts on Tweens and Teens and Dating Violence from Futures Without Violence states that in a national online survey, 2 out of 5 respondents ages 11 and 12 report that their friends are victims of verbal abuse. According to Break the Cycle, lesbian, gay, and bisexual youth are more likely to experience physical and psychological dating abuse, sexual coercion, and cyber dating abuse than their heterosexual peers. For runaway and homeless youth, engaging in subsistence strategies in order to survive can place them at greater risk of experiencing all forms of relationship violence, including emotional abuse.

Despite its prevalence, emotional abuse in dating relationships very often goes unidentified and unreported. Factors such as lack of physical evidence, young people’s assumptions that tactics of emotional abuse like teasing and name-calling are a normal part of dating, and lack of parental awareness about the seriousness of dating violence can make it difficult to spot warning signs of emotional abuse in teen relationships. Other factors, such as fear of being “outed” for LGBTQ teens, fear of not being listened to or believed, not knowing where to go for help, and confusion about the law/confidentiality concerns can also play a major role in young people not getting help when experiencing dating violence. As with intimate partner violence in adulthood, intersecting forms of oppression experienced by youth such as racism, homophobia, transphobia, etc. can create additional obstacles to accessing help.

“I have started rebuilding my confidence, my name was not nor will it ever be the hateful and hurtful names he'd call me. I am not what he says I am! I deserve better.” – Stephanie, #NOMOREVerbalAbuse campaign

This February marks the 10th anniversary of Teen Dating Violence Awareness & Prevention Month (TDVAM), which means that this month is the perfect time to turn outrage into action to prevent emotional abuse and to promote safe and healthy relationship norms for teens. When it comes to preventing dating abuse in all of its forms, Awareness + Action = Social Change!

Below are some steps that domestic violence advocates can take to raise awareness about emotional abuse for TDVAM.

Build relationships with local youth and highlight existing youth-led social change efforts. As Powerful Voices states, “Young people, particularly girls of color, hold wisdom and brilliance in how they navigate the world… In order to build a new world, we need to trust in the expertise of young people and to work alongside them for social justice.” One of the most important things that domestic violence advocates can do in their efforts to prevent dating violence in all of its forms and to promote healthy relationship norms for teens is to build meaningful connections with youth leaders in their communities.

Youth-led programs like the Sitka Youth Leadership Committee, a project of Sitkans Against Family Violence, are doing exciting community-based work to promote healthy relationship norms by highlighting every young person’s right to be a respected and celebrated individual, whether or not they are in a relationship. Youth-driven programs like NativeLove from the National Indigenous Women’s Resource Center and Youth Amig@s from Casa de Esperanza are working to build youth leadership and shift narratives around healthy dating relationships through peer education and support. Are there young people doing great social change work in your community? The answer is certainly “yes” – so get connected with young people in your community and find out how you can amplify their social justice efforts!

Building inclusive intergenerational activist spaces and engaging with youth leaders, particularly girls of color, as truly equal partners is critical to our efforts to prevent and respond to relationship violence.

Collaborate with community partners. In order to build the capacity of parents, teachers, and other community members to identify and respond to signs of emotional abuse among teens, domestic violence organizations need to have strong partnerships with schools, faith communities, cultural community centers, and other youth-serving organizations. Plus, these organizational partnerships can also provide great opportunities to connect with local youth leaders in your community! For strategies to engage parents, schools, and other youth-serving organizations in dating violence prevention and healthy relationship skill building, check out the PreventIPV Tools Inventory. 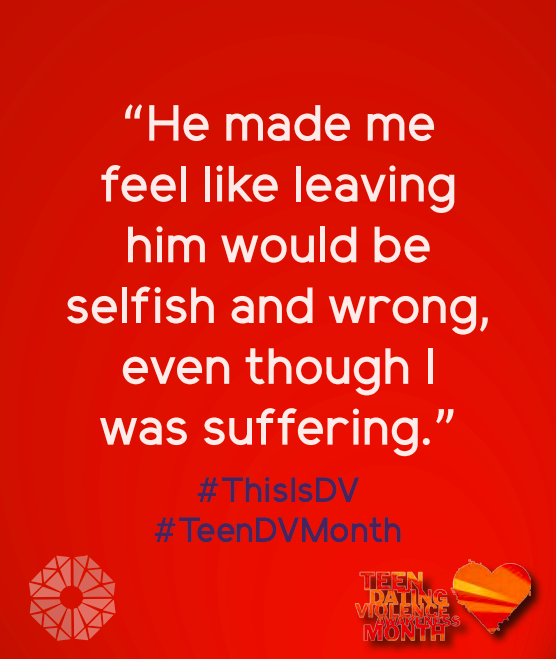 Launch an emotional abuse awareness campaign. Lack of awareness about the seriousness of emotional abuse in dating relationships is a major barrier to survivors getting the help they need. Online resources like the #NOMOREVerbalAbuse toolkit and That’s Not Cool offer tools, shareable imagery and quotes, and information about healthy vs. unhealthy relationships that advocates can use to raise awareness about how to spot common tactics of nonphysical abuse. Shareable images from the Domestic Violence Awareness Project’s #ThisisDV social media campaign feature survivor quotes highlighting the negative impact of non-physical aspects of domestic and dating violence, such as threats, coercion, and other forms of emotional abuse. Raising awareness about the fact that emotional abuse is abuse helps young people and their loved ones to identify abuse when it happens and promote healthy dating relationships built on respect, equality, and trust.