How can partnerships with faith communities support accountability and hope for those who cause harm?

Editor’s Note: While the authors of this post are well versed in working with diverse faith communities and much of the information and guidance discussed here could be applied in diverse religious settings, it is important to note that the authors share a white, Christian, Protestant, and heteronormative lens.

My name is Anne Marie Hunter. As a Technical Assistance provider for the Office on Violence Against Women, I’ve facilitated training on domestic and sexual violence and elder abuse in communities from Florida to Alaska, from California to Maine, and many wonderful places in between. My agency, Safe Havens Interfaith Partnership Against Domestic Violence and Elder Abuse, helps to build partnerships between faith leaders (clergy and lay) and domestic and sexual violence advocates.

As a faith leader, I know how critically important these partnerships are. I led a congregation for six years. During that time, I spoke openly about domestic violence, and many survivors asked for help. Most said something like, “I don’t want the relationship to end, I just want the abuse to stop.” While the spiritual support and “permission” to seek safety that I provided were crucial, the referrals that I made to domestic and sexual violence advocates were life changing as well. Survivors of abuse deserve the best of what both faith leaders and advocates bring to the table.

At Safe Havens, we know that faith is often critically important to survivors. This may be especially true for older survivors and survivors in communities of color; rural communities; religious, ethnic, or cultural minority communities; and immigrant and refugee communities. In all these circles, faith is often the vibrant center of life, family, identity, and community. While faith can sometimes be a barrier to safety, it can also be a tremendous resource for survivors, and is often critical to understanding the abuse, identifying options, making decisions, and finding safety. For instance, many African American survivors “turn to spirituality and/or their faith communities in their search for strength, solace, support and assistance. Some find strength to cope with, heal, break free and/or remain free from abusive relationships through their spirituality and/or engagement in religious community” (Institute on Domestic Violence in The African American Community, 2009).

In fact, research shows that many survivors first seek help from people they know and trust: friends, family, and, often, faith leaders. Psychology Today reports: “When it comes to life issues, Americans turn to their ministers, priests, rabbis and imams far sooner than they consult mental health professionals.” Because 77.2% of people in the U.S. report a religious affiliation, faith communities have a unique opportunity and responsibility to reach survivors and increase access to services. With the appropriate training and in partnership with advocates, faith leaders can provide important support for survivors. 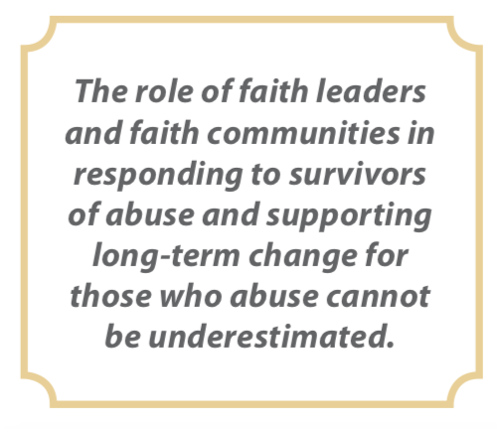 Over the years, faith leaders from around the U.S. have asked me how to respond to abusers. Many faith leaders (like many people in the wider community) have been taken in by an abuser’s charm and likability. Faith leaders say, “He said he was sorry, so I told her to go back home and get the family back together.” Or, “He’s the nicest guy whenever I’m around; I’m sure he wouldn’t hurt anyone.” With little to no training or resources about abuse, faith leaders can be, as one said to me, “suckers for a good confession.” As a result, well-meaning faith leaders may minimize the violence, silence or blame the victim, and suggest unsafe options.

Even in the best of circumstances, the “dance” between compassion and accountability is complex, as faith leaders struggle to balance relationship dynamics, culture, and values within their community. Often the faith community includes not only the survivor and the abuser, but also their extended families, sometimes over several generations. The faith leader may have provided pre-marital counseling to the couple or officiated at their wedding. Faith leaders don’t want to show favoritism to one congregant over another and centering the needs of the survivor can feel like taking sides. Faith leaders also appreciate the stability that a loving, respectful family can provide and may assume that all families have these healthy patterns. Like many survivors, and particularly survivors in communities where family is more central (African American, Latin@, Asian American, rural, etc.), faith leaders want the abuse to end and relationships to continue.

And so, faith leaders have continued to ask these important questions:

Several years ago, I reached out to Dr. David Adams, a person of faith and a national expert on understanding and working with those who abuse. Together, we began an ongoing conversation about these questions.

My name is David Adams. As the co-founder of Emerge, I have counseled abusers for over 40 years, and I have some suggestions for faith leaders who wrestle with finding the right balance between compassion and accountability. 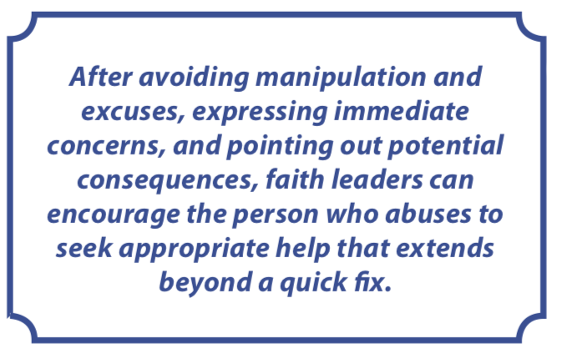 First, before and even during counseling, many abusers blame their partners for the abuse and seek support and reinforcement for their grievances against their partners. While it’s a natural instinct to offer support and solace when a person reveals pain, faith leaders should recognize how the support they offer can be misunderstood by the abuser as a sign of support for, or even agreement with, their abusive behavior. Such support, whether intended by the faith leader or imagined by the abuser, enables the abusive person to continue to blame their partner for the abuse and its repercussions. Blaming the partner often persists even after admissions of guilt or dramatic and tearful confessions.

Faith leaders are also sometimes swayed by “quick fixes” from the abuser, such as apologies, excuses, false narratives, promises to change, tearful expressions of remorse, and even commitments to get help. Rather than reflecting a commitment to change, these tactics, which are often used to manipulate their partners, are now being deployed to throw faith leaders off the track of recognizing what is needed for genuine and long-lasting change. Here is one example provided by an abusive man engaged in counseling at Emerge, when reflecting back on his previous experience with a pastoral counselor:

“I hate to say it but I really kind of suckered him by telling him about my abusive father and mother. I think he kinda took that as a sign that I was sorry, which I was, but not sorry enough to change my behavior back then…. He was on the phone with my wife and telling her how much pain I was in. Good for her that she wasn’t falling for it…. My crummy upbringing didn’t mean shit to her after how I treated her…. And this guy [the pastoral counselor] was trying to convince her I deserved a second chance, and she’d already given me a hundred [chances].” *

It is important for faith leaders to know that accountability differs from both punishment and confession. Punishment does not require the individual to take responsibility for or change their abusive behavior, but simply to pay a fine or to serve a sentence. While confession requires a person to admit a sin, in some faith communities there is no requirement beyond this to take responsibility for and change the sinful behavior. Further, there may be no requirement to articulate how that behavior has impacted others or to make amends. 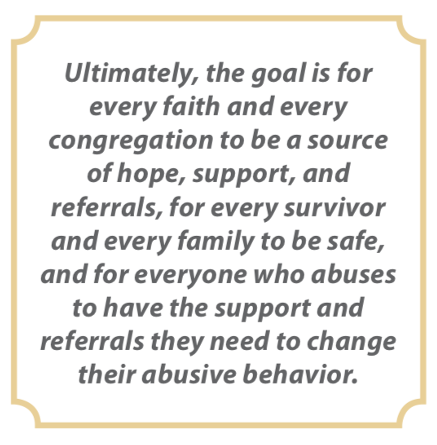 Accountability, or counseling for the person who abuses an intimate partner, must be premised on the idea that 100% of domestic violence is caused by the abuser. Abusive behavior is fundamentally a choice made by the abuser, no matter what other problems may exist in the relationship. Programs that specialize in counseling of people who abuse are best equipped to provide opportunities to be accountable, within a consistent framework, for abusive behavior.

In contrast to punishment and confession, accountability entails a process for taking responsibility in a manner that can be evaluated as acceptable or not acceptable to others. Intimate Partner Abuse Education Programs (IPAEPs) like Emerge usually promote at least four distinct steps of accountability. These steps are as follow.

Unless followed by Steps 2 and 3, simply admitting certain aspects of one’s abusive behavior, or offering a general or blanket apology such as “I’m sorry for how I may have hurt you,” or even, “I’m sorry for everything that has happened,” does not entail recognition of one’s responsibility or its specific impact on others. True accountability needs to be an interactive process wherein others can provide informed feedback at each step.

Emerge and most other IPAEPs provide confidential outreach to the abuser’s partners or ex-partners for the purpose of giving the survivor accurate information about the methods and philosophy of the program, and beyond this to make referrals for victim advocacy services. In Massachusetts, partners and ex-partners are also asked if they would like to be informed about the abusive person’s participation in the program. This includes whether the person is admitting abusive behavior, as well as whether they are still minimizing abusive behavior or blaming their partner/ex-partner for it. In effect, this includes survivors, if they are interested in receiving this information, in the abusive person’s level of accountability. IPAEPs also provide this same information to the program participant’s probation officer, and if child welfare is involved, their case worker. This information to partners/ex-partners and referral sources expands the abusive person’s circle of accountability. This level of information sharing is in contrast to individual psychotherapy which can tend to re-privatize domestic violence.

A fuller discussion of these suggestions, along with safety guidelines and recommended responses to those who abuse, are included in Between Compassion and Accountability: Guidelines for Faith Leaders Responding to People Who Abuse Intimate Partners. In addition, please check out the Safe Havens and Emerge websites for more information, or email us at amhunter@interfaithpartners.org or dadams9@aol.com.

Additional information for faith communities working with those who cause harm:

When the Abuser Is Among Us: One Church’s Response to a Perpetrator by Carol J. Adams. This article provides inspiration and guidance for churches on how to respond to perpetrators of abuse in their midst. As the author explains, while “there is always a desire to push for speedy forgiveness and reconciliation…the church’s goal must be to be a naming and healing congregation, to model living with integrity.”

Safe Havens works with diverse faith congregations across the U.S. to promote safe and effective faith-based responses to domestic violence. A wealth of free resources is available on their website for download, including resources for faith communities and faith leaders on dating violence, stalking, domestic and sexual violence, elder abuse, and responding to those in the congregation who abuse.

CONNECT seeks to create safe families and peaceful communities by transforming the beliefs, behaviors, and institutions that perpetuate violence. CONNECT’s Faith Roundtable offers a space of ongoing dialogue, education, support and healing to discuss the struggle to end violence in our lives, in our faith communities, and in our world.