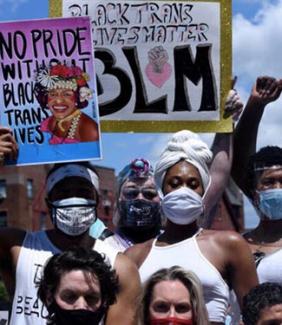 "Violent deaths of transgender people in the United States are on track to reach a record high this year after two Black trans women were killed in the last week, with advocates blaming a rise in anti-trans rhetoric.

Human Rights Campaign (HRC), the largest LGBT+ advocacy group in the United States, has recorded 25 killings this year, which means violent deaths in 2020 are likely to exceed the previous record of 29 in 2017.

'As a Black trans woman, I feel absolutely horrified, I feel scared, I feel almost targeted - and I use that word specifically,' said Tori Cooper, a director with HRC's transgender justice programme.

Violence against Black trans women, who face discrimination for both their race and gender identity, became the focus of LGBT+ Pride marches in the United States and Britain last month, under the banner Black Trans Lives Matter."

Learn more about how advocates can support trans survivors from VAWnet's Serving Trans and Non-Binary Survivors of Domestic and Sexual Violence special collection.