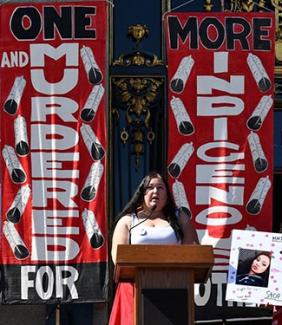 "Tammy Carpenter was in tears as she drove through a rural stretch of Northern California two years ago to Shasta County, near where her adult daughter, Angela McConnell, was found shot to death with her boyfriend in an encampment favored by transients. She still remembers the way a sheriff's detective, who was not Native American, like herself, handled the delicate conversation.

Carpenter said that his line of questioning insinuated that her daughter had come from a broken home where no one had jobs and all were involved with drugs.

'I'm a very vocal person, and I gave it to that detective,' Carpenter, 51, said this week. 'All my sisters and I graduated from college. We worked. We all loved Angela. With society today, people look and think: 'It's another dead Indian girl. Probably a drug addict. Homeless. Who cares?' That got me very upset.'

The mysterious circumstances surrounding McConnell's killing is one of hundreds of cases of missing or murdered Indigenous women and girls across the United States that never garnered national headlines or social media attention or demands for justice from powerful people. The absence of awareness or widespread scrutiny in these cases is the focus of a report released Thursday that documented 2,306 missing Native American women and girls in the U.S., about 1,800 of whom were killed or vanished within the past 40 years.

Nearly 60 percent of the cases are homicides and 31 percent involve girls 18 and younger, according to data analyzed by the Sovereign Bodies Institute, a nonprofit, Indigenous-led research organization that began counting and mapping such missing and murdered cases over the past few years. In addition, nearly three-quarters of the cases had victims who were living within the foster care system when they went missing. The vast majority of cases in the U.S., as well as another 2,000 in Canada, remain unsolved, according to the research.

The perceived lack of sensitivity from law enforcement when Carter's daughter was found dead isn't unique. In the Sovereign Bodies Institute report, families described insufficient cultural awareness from law enforcement, as well as 'poor or nonexistent communication with families and survivors, chronic lack of cases being brought to justice and ... past and ongoing violence perpetrated by officers.'"