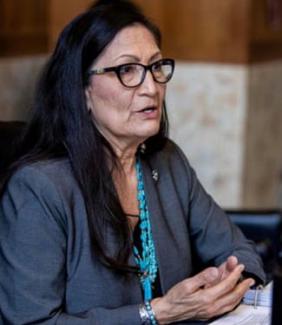 "For 30 long years, Ana White has been searching for her sister, Andrea 'Chick' White. The then 22-year-old Native mother of four including an eight-month-old baby had traveled to Eureka, California, in July 1991 for a court date, after an auto accident. She was spotted hitchhiking home along a freeway near Blue Lake, in northern California. She has been missing ever since.

White, who described her sister as a great mother and very giving person, has repeatedly prodded local law enforcement, who she said have largely given her 'lip service,' and helped to spread awareness about the case through social media posts. But for three frustrating decades the situation has remained unchanged.

Now, after the secretary of the interior, Deb Haaland, announced the formation of a new unit to investigate the epidemic of missing and murdered Native Americans, she said she has suddenly found herself with a renewed sense of hope.

'It’s like, oh, suddenly I’m breathing. It’s like I’m being resuscitated,' said White, a member of the Hoopa Valley Tribe. 'If my feelings were to be visible, that’s what you’d see. Somehow, I’ve got this oxygen tank right here, and Deb Haaland put it on my side.'

Haaland, the first Indigenous cabinet secretary in US history, announced the formation of the Missing & Murdered Unit (MMU) within the Bureau of Indian Affairs office of justice services earlier this month, just two weeks after being sworn in.

In a statement, Haaland, an enrolled member of the Pueblo of Laguna, described the violence against Native people as a 'crisis that has been underfunded for decades.'

...Roxanne White, a survivor of human trafficking, a family member of missing and murdered Indigenous people and an activist, said she was excited that Haaland has this position and is leading this work. But, she said, moving forward she would like to see there be a real collaboration between officials and families within the new unit.

'We are going to be the ones to guide this,' said White. 'I really believe this, because we’re the ones that have been doing this work. We’ve been doing the searches; we’ve been the ones dealing with all of this stuff … The relationship between, you know, governmental, FBI, DoJ and families has to be stronger, and it has to be more meaningful and authentic.'”