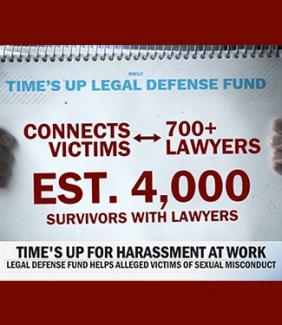 "When 20-year-old Barbara Johnson was working at a St. Louis area McDonald's in November 2017, the sexual harassment started with a co-worker's inappropriate comments, she said.

'When I was going into work, I'd be thinking, do I really want to go in here and deal with this today?' she told CBS News correspondent Jericka Duncan. 'He made comments about my breasts, my lips, how juicy and sexy my lips look. What I would look like on top of him.'

To keep a low profile, Johnson said she dressed differently.

'I even went and got two sizes up in my pants just so they could be baggy so my shape won't show in my pants or my uniform,' she said.

After a month on the job, Johnson had enough when a shift manager touched her.

'The night that he touched my breasts was the last night I worked at McDonald's,' she said. 'I couldn't take it no more.'

Not long after Johnson left, the Time's Up movement took off.

'A new day is on the horizon,' Oprah Winfrey said to applause at the Golden Globes in January 2018. 'Their time is up.'

'As Oprah was on stage saying Time's Up ... we got over 200 calls just in those couple of hours,' co-creator of the fund Fatima Goss Graves said.

Since 2018, they've raised $24 million in donations with the most support coming from the entertainment industry. Nearly 90% of the money goes toward helping survivors.

The fund pairs alleged work sexual harassment victims with their team of more than 700 lawyers and helps pay their legal fees. So far, they said they've linked an estimated 4,000 survivors with attorneys."

Know Your Audience: Choosing the Best Learning Activities for Your Training

Beyond the Wheel: Domestic Violence in LGBTQ Communities