We exist! As a woman of color, how can I find my place in the domestic violence movement? 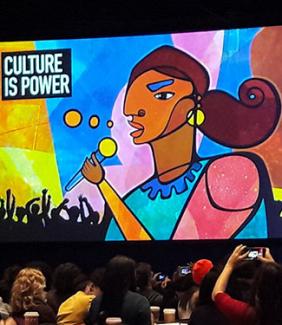 I hear you! For many years I struggled to find my place in the domestic violence movement; as a matter of fact, sometimes I feel I still am. As a Puerto Rican trying to join a movement that left out the concerns and issues of communities of color was very difficult. I felt that I continually walked behind, followed the lead, checked the box and represented without really representing. Fast forward 20 years and we are still struggling to address how women of color have historically been disregarded, dismissed and devalued in the movement. We might be more visible, but do we really have a seat at the table?

“If you don’t have a seat at the table, bring your own chair.” —Mindy Aponte 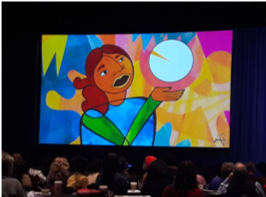 We have been bringing our own chairs for a very long time and we have also created our own tables. Let me share some history. According to Jenny Aszman, an intern at the Georgia Coalition Against Domestic Violence;  women of color in the movement first came together during the first national meeting of the National Coalition Against Domestic Violence (NCADV) in February of 1980. During that conference the women of color present noted an evident lack of representation: the trainings, speakers, and workshops were rarely led by women of color and they barely touched on the experiences of women of color within the movement and shelter programs. This extreme sense of invisibility led the women of color at the conference to form the Third World Women Caucus. According to the document titled ‘Going Back to Go Forward: A Brief History of Women of Color in Georgia’s DV Movement,” the caucus was instrumental in collecting and presenting information to NCADV regarding the lack of representation, the need to collaborate with organizations that focused on women of color, on the specific needs of these communities, the lack of women of color leadership and the establishment of a collection of anti-racism documents and tools to be used in domestic violence agencies.

Another great example of how women of color have created their own tables is the womanist and mujerista movements. In the 1980s Alice Walker published the book In Search of Our Mothers’ Gardens. This collection of prose shares insights into racism within the feminist community. Alice defines a "womanist" as a black feminist or feminist of color and identifies and critically analyzes sexism, anti-black racism, and their intersection.

Around the same time, the mujerista  (developed from the Spanish word for woman, mujer) was seized by Latinas to claim their space over white feminists. The first publication that highlighted the mujerista theology, then called Hispanic Women's Liberation Theology appeared in the USA in 1987.

“We are not perfect, but we are worthy…we are enough.” —La Tere, Facing Race Conference 2018 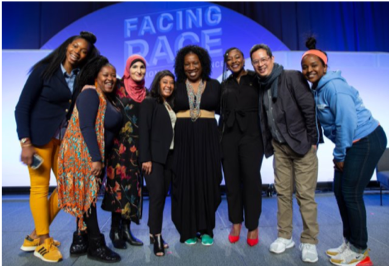 This past November NRCDV staff attended Race Forwards’ conference Facing Race. Since its inception the Facing Race conference has lifted up regional history and current challenges faced by communities of color. For some of us at NRCDV, attending Facing Race 2018 was an opportunity to learn about struggles and solutions experienced by our communities and connect with other advocates of color. It was a celebration of people of color by people of color. Spaces like this one help advocates of color feel connected and energized. The conference helped me reflect on some of the things I can do to find- and sometimes demand- a space at the table in the movement to end gender-based violence. Facing Race also provided me with a blanket of solidarity and shared love, both resistance strategies that work. I was reminded of the resilience and creativity of communities of color and those living at many intersections. We are strong, we are wise, we are beautiful. Below I share some suggestions that could connect you to other people of color in the domestic violence movement.  These help me remember that I’m not alone and that I must bring my whole self to work every single day.

Join others. During the conference Tarana Burke talked about the importance of not working in isolation and how supporting sister social justice movements will make our own causes more powerful. Remember, divisiveness is a tool of the oppressor. There are many national culturally specific organizations that can provide the support and resources that people of color need. Some of these include: 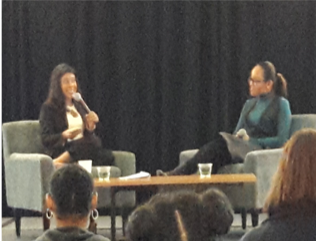 Take care of yourself. Don’t forget that one of the greatest gifts you can give yourself is to take time for respite so that we can sustain the work. Activist  Rinku Sen  and actress Dawn-Lyen Gardner reminded us about the importance of taking time for self-care when we are feeling on the verge of burning out and how to always keep love at the center of our practice. We must find joy in our daily work, even when we struggle to find our place.

“I can’t recall another time in my life that getting to work felt more urgent, yet I don’t know what that work is. I trust that all will reveal itself, and in the meantime, I’ll keep doing all I can to support our many leaders who are clear and effective.” —Rinku Sen 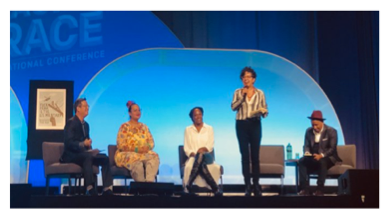 Don’t forget your story. Another theme that was really present during the conference is to always remember and share your story. For communities of color sharing our stories has been not only a way of passing our culture and values to younger generations but also a way to stay grounded and focused. During the workshop titled “Documenting the Revolution: Storytelling for Collective Liberation,” Nadia Bourne and Jenna Torres shared information about the importance of sharing our struggles and triumphs to move us forward collectively towards sustainable social change. If you want to learn about crafting your story, VAWnet has a great number of resources on storytelling for social change.

So, let’s continue to bring our own chairs and if needed, we’ll bring our own colorful tables! Like Tarana Burke said “don’t fall back but instead, stay engaged and claim that this has always been and always will be our work”. Throughout the years the contributions of women of color have been instrumental in identifying intersections between domestic violence, culture, poverty, education, and racism. By putting these intersections at the front and center, it has enabled the domestic violence movement to address domestic violence as a social justice issue. If you are an aspiring white ally and would like to support advocates of color, remember that It’s critical to practice humility and come to us ready to listen and learn. There are many ways that you can use your privilege to ensure that there is a space at the table for people of color.

How do you make sure that people of color have a space at the table?