After Weinstein, Tarana Burke on what's next for the #MeToo movement 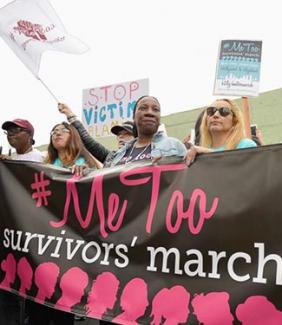 "When #MeToo founder Tarana Burke heard Harvey Weinstein was convicted of sexual assault and rape, the women's rights activist said she was 'shocked' and 'relieved.'

Burke had prepared herself for the possibility that Weinstein, who was acquitted of charges for predatory sexual assault and of rape in the first degree, would walk out of the courtroom a free man.

After checking in with survivors to make sure they were OK, Burke allowed herself to reflect on the monumental verdict.

'I wasn't disappointed in the sense that I thought that that was going to happen,' she told 'Good Morning America.' 'I knew, going in, when you look at the charges, the time that had passed and all these different circumstances, I knew it was going to be difficult.'

As the #MeToo movement has gained momentum in the past three years, Burke has seen incredible growth and support from survivors and allies across the nation.

'Being able to scale up the work that we started in small grassroots communities and then the urban communities in Philadelphia -- and rural communities and Alabama, to national and international levels -- is just incredible,' she said.

Burke is now hoping to 'take advantage of this moment while people are paying attention' to increase activism, create a cultural shift and restructure the way the new generation learns about sexual violence."

COVID-19 has left many of us struggling. Tune in to "Self-Care & Healing During COVID-19" for insight on addressing grief, promoting resilience, and fostering hope through self-compassion and holistic healing practices.