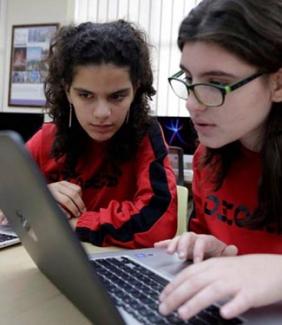 "Three Albanian 16-year-old girls have developed an app to help victims of domestic violence access support, hoping to tackle a huge problem in Albania, where one in two women suffered abuse last year, according to a survey.

They will launch their app, known as GjejZâ, (Find your Voice), on Friday, after winning an international technology competition for girls in the United States.

'Violence against women is a huge issue in Albania and it also affects us as teenage girls because we see the early stages of this even in our peers, in our friends,' said Jonada Shukarasi, one of the developers.

One in two women suffers violence in Albania, said Iris Luarasi, the head of a national hotline for abused women, citing a 2018 survey, and 4,000 cases were reported in 2018.

A new report by the Organisation for Security and Co-operation in Europe (OSCE) found almost 9 in 10 women consider violence against women to be common in Albania, and that 97% of victims of intimate in-house violence never report it to the police.

Known as the D3c0ders, the girls - Arla Hoxha, Dea Rrozhani and Jonada Shukarasi - learned how to code and create applications four years ago through an outreach programme run by the U.S. Embassy in Tirana."

Know Your Audience: Choosing the Best Learning Activities for Your Training

Beyond the Wheel: Domestic Violence in LGBTQ Communities