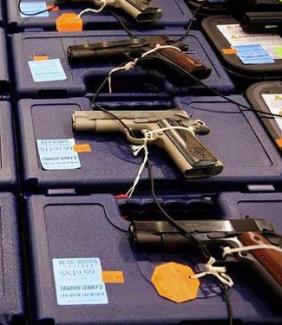 "When domestic violence offenders are required to relinquish their guns, instead of simply being barred from owning firearms, the risk that those offenders may kill their partners goes down, a new study finds.

The paper, described in the Annals of Internal Medicine, highlights a simple method for lowering the risk women face of being killed by an intimate partner: Enforce the laws already in place.

Each year, the study authors point out, more than 1,800 people are killed by their intimate partners — current or former spouses or people they dated, for example. About half of those killings are carried out with a gun.

...In states that simply banned gun possession, the gun-related intimate-partner homicide rate did not drop by a statistically significant amount. But in those that required offenders to surrender their guns, that rate dropped by a full 14%."