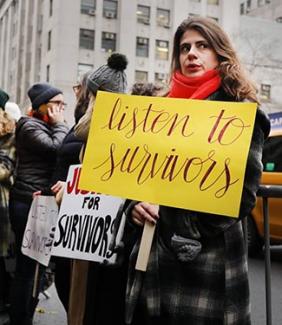 "The trial of former Hollywood producer Harvey Weinstein did not begin with the bang of a judge’s gavel, but with a wave of silence that fell over the crowd of people standing outside the county courthouse building in New York when the disgraced mogul emerged from a black SUV Monday morning.

In the crowd were seven women who looked on solemnly as Weinstein walked, their arms draped over a barricade that separated them from him and his entourage.

Some held signs that read 'Justice for survivors' and 'Listen to survivors.' Weinstein did not meet their pointed stares when he shuffled into the building with the aid of a walking frame.

The group, a small coalition of the 80 women who have accused Harvey Weinstein of sexual misconduct, gathered to mark the start of what they hope will be the vehicle that brings justice for Weinstein’s accusers.

'I stand in solidarity with the brave survivors who will take the stand against Harvey Weinstein in this trial. While the emotion of the day runs high, I join these other brave women who were also harmed by Harvey Weinstein to say: We aren’t going anywhere,' the actor Rosanna Arquette told reporters moments after Weinstein disappeared inside the courthouse."

The Use of Electronic Evidence in Sexual Assault Cases