How can I and my agency best respond to victims of sexual violence in later life? 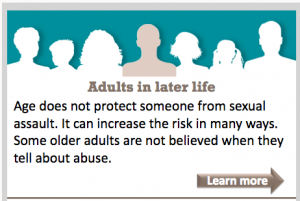 by Karla Vierthaler, MPA, Manager of the Lifespan Project at the National Sexual Violence Resource Center

Working with elder victims can feel intimidating for rape crisis programs and advocates. Survivors in later life do not walk through your doors often, and when they do, there may be a range of issues you and your agency are not used to dealing with. However, national data suggests that three to five million older adults experience some form of abuse annually (Connolly, 2011). Learning more can make all the difference.

Many of the dynamics of sexual violence in later life are similar to those experienced by people in other age groups. People who perpetrate come from all walks of life, are male and female, young and old. Perpetrators tend to know the older adult, and exploit their relationship in some way. People who commit sexual violence against older adults are often their paid or unpaid care providers, family members, spouses, neighbors, or peers.

“Historically, people in later life have not been considered potential or actual targets of sexual violence. There are many reasons for this, including ageist beliefs that they are not sexual beings and are not sexually desirable. Misconceptions regarding rape, including the myth that sexual assault is a crime of passion rather than a crime of violence, also contribute to people in later life being widely overlooked as victims.” – Holly Ramsey-Klawsnik, PhD (NSVRC, 2010)

Sexual violence in our communities and care facilities

While most people in later life live in the community, the dynamics of sexual violence in a care facility can be unique. Across the United States, people that work in care facilities are mandated reporters of sexual abuse—meaning that an older victim may be involved in an investigation without their consent. While care facilities provide a seemingly safe environment, there is also more opportunity for perpetrators to have access to a population who often requires intensive physical care. People who perpetrate sexual abuse may exploit age-related disabilities such as dementia or limited mobility.

In the community, sexual violence in later life often intersects with physical abuse, financial exploitation, or neglect. Care providers may use sexual tactics to abuse individuals—such as forcing them to watch pornography or taking sexualized pictures without consent. There is a small but legitimate market for pornographic pictures of people later in life.

In any setting, sexual violence of people in later life is similar to sexual violence across the lifespan. Older adults have diminishing power in our culture—from age-related physical and cognitive disabilities to ageist stereotypes—which is a universal risk factor for sexual abuse.

Meeting survivors where they are

Advocates can best serve older adults by first calling on the fundamental skills used with all sexual assault survivors —empowerment and victim-centered advocacy. An elder victim will let you know what (s)he needs—if you listen. General tips for one-on-one advocacy begin with building rapport with the survivor, take the time to build a relationship and allow the victim to determine how and when (s)he brings up what happened. Always mirror the language used by the survivor when talking about what happened. If you must ask about what happened, use neutral questions such as, “did someone do something to you without your permission?” or “did someone do something that made you uncomfortable?” and similar behaviorally-based questions. Use the terms sexual abuse, rape, and sexual assault with great care (if you need to at all), as you don’t want to define the experience for the survivor. Additional tips and guidance for advocates can be found though the National Clearinghouse for Abuse in Later Life. An online course designed to help advocates work with later in life victims is also available through the e-learning campus on the NSVRC website.

The suggestions above hint at the importance of generational differences between advocates and those impacted by sexual violence in later in life. Beliefs about sex and sexual violence have changed over the years. Common stereotypes of elders’ generational beliefs tend to focus on the role of women as housewives, neighborhoods as safer and friendlier (“we left our doors unlocked”), and as a generally less violent period in America. The reality of these stereotypes is that these differences were only true for some white, middle class Americans. It is important to keep in mind that adults who are now over 70 lived through desegregation of American schools and the American Civil Rights Movement. Many were born during or right after World War II, and lived through the Vietnam War, the women’s liberation movement, and the Kennedy assassination. It is also true that sex, sexual violence, and domestic violence were rarely discussed in a public forum during that time. These experiences are important to bear in mind when interacting with an older adult currently experiencing sexual violence or struggling with past sexual violence. That said, advocates should also recognize that generational norms are loosely defined—life experiences that include growing up in a different culture, experiences with trauma, or experiencing oppression and other obstacles can impact a survivor’s experience much more than the generation in which they grew up.

Considering experiences across the lifespan

A final piece for advocates to keep in mind when working with any survivor is that victimization, including sexual abuse, is part of your client’s life experience. The older the victim, the higher the likelihood that abuse which occurred in the past was probably not disclosed, handled appropriately if it was disclosed, or community responses were not in place to advocate or seek justice for the victim.

For agencies serving those who have experienced sexual violence, cross training and outreach within the community can be vital. Forging connections with other agencies serving older adults such as adult protective services, nursing and personal care homes, in-home care agencies, senior centers, and churches is so important. An excellent article on providing sexual assault advocacy services to people residing in care facilities discusses both the heightened vulnerabilities and the importance of having advocacy services reach into these facilities.

Making a commitment to begin serving a wider range of victims can trigger critical discussions about how your agency accepts clients. Because our movement is empowerment-based, we have historically asked that our clients initiate services. For some survivors, this is not possible. They may also ask someone else to reach out on their behalf. Be open to working with these individuals, no matter how they come to you. For those with transportation issues, consider meeting them at a safe location, which may be their home. This is unorthodox, but may be necessary. If time/money/staffing won’t allow in-person visits, consider phone counseling. Be creative and do your best to meet these survivors wherever they are.

Your agency also needs to be accessible to all survivors including those in later life. Do you have images of older adults in your print materials? Are your staff/board/volunteers diverse in age? Is your agency physically accessible if someone uses a wheelchair or walker? Is your staff comfortable working with adults in later life and understand the systems involved in addressing abuse and resources available for older adults? There are multiple things to consider in making welcome those in later life. Additional outreach strategies for advocates and agencies to consider for later life survivors can be found here.

Serving survivors of sexual violence in later life may stretch your advocacy skills in a different direction and suggest an expansion of agency policies, but serving this group of survivors is part of providing comprehensive victim services to your community. For additional information, please visit the Lifespan Project of the NSVRC: Sexual Violence Against Adults in Later Life. Additional resources can also be found in the VAWnet Special Collection: Preventing and Responding to Domestic and Sexual Violence in Later Life.

How is your agency serving survivors of sexual violence in later life?

There is Hope & Joy Ahead: Webinar III of the Self-Care & Healing During COVID-19 Webinar Series