'It's not abuse, it's rape': protesters denounce Spanish assault ruling 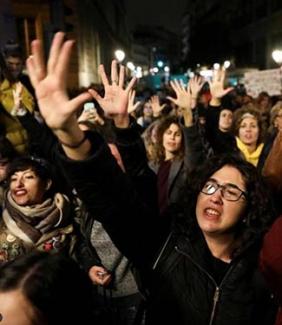 "Hundreds of people protested in Spain's capital on Monday against a court ruling last week that cleared five men of gang-raping a 14-year-old girl and instead found them guilty of the lesser charge of sexual abuse.

Barcelona's High Court sentenced the five on Thursday to 10 to 12 years in prison, saying the 2016 assault was not rape because the victim, who was drunk and unconscious, could neither 'agree to (nor) oppose the sexual relations.'

A similar ruling in the so-called Wolfpack case sparked mass protests across Spain last year over chauvinism and sexual abuse and it was eventually overturned by the Supreme Court in June.

'It's not abuse, it's rape' and 'Enough with patriarchal justice' chanted the crowd made up mostly of women gathered in front of the Justice Ministry in Madrid.

Many were wearing purple scarves, a colour associated with feminist movements, while others carried purple umbrellas or wore purple gloves.

'No one deserves something like that,' 44-year-old designer, Pilar Villanueva, said. 'One way or the other, the government must do the criminal code reform they had promised.'"

Getting Curious: Exploring the Rise of Survivorship as an Identity