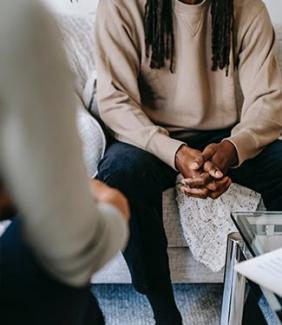 The CDC estimates that 1 in 6 men have been sexually victimized at some point. It's a largely silent epidemic despite revelations of abuse by Catholic priests and Boy Scout leaders. Not confronting this issue only makes recovery harder. Rachel Rock brings us one man's search for support.

RACHEL ROCK, BYLINE: Jim Holland says he was raped by a priest when he was 13 years old. He locked his trauma away for 30 years, held it at bay with drinking, drugs and promiscuity. The 2003 Boston Globe Spotlight investigation of priest sexual abuse triggered Holland's memories.

JIM HOLLAND: But I kept on saying, no, it was no big deal. That really didn't happen.

ROCK: He knew he needed help, but there were few therapists specializing in this kind of trauma in Boston. Holland shoved his pain back down. It took another five years, his brother's suicide and a pulmonary embolism for Holland to try again. This time, he found a men's support group.

HOLLAND: But it was uncomfortable. I didn't want to be there, and my heart was beating.

ROCK: At the first session, Holland remembers that everyone's eyes were locked on the carpet. Sharon Imperato of the Boston Area Rape Crisis Center helped facilitate Holland's group and has worked with male survivors for nearly 20 years. She says that on average, men seek services around age 40 for many reasons - a partner demand they get help in hopes of saving the marriage, a man wants to be a better father or his children are turning the age when he was abused. Imperato says that many men don't recognize their trauma, sexual abuse or rape.

SHARON IMPERATO: Which is knowing that someone had hurt them, someone had chose to hurt them and it was having an impact on their life. So it's the impacts that brings them it.

ROCK: Imperato also trains other providers. She says the mental health field itself has yet to fully recognize the prevalence of male survivors, let alone learn the skills to provide appropriate support.

IMPERATO: Even this day and age, people are still shocked that men experience sexual violence and the rate that they experience it. I'm just not sure if providers are necessarily asking or looking for it.

ROCK: Jim Holland says he couldn't have recovered without his support group. It taught him that he was not alone and to let go of his shame.

HOLLAND: It allowed me to bare my soul, so to speak, in front of a group of other guys without being judged. You always have to remember that you're not to blame for what happened to you. You were a child."

The National Resource Center on Domestic Violence and the National LGBTQ Institute on IPV are pleased to invite you to participate in the inaugural Actualizing Justice Institute this September!

Pre-teen boys are at a critical age. RedefineSLO offers the tools that parents and educators need to be positive role models for the pre-teen boys in their lives, including conversation guides, educational readings, and more!

SAFeR: Getting Child Support When the Co-parent is Abusive

A Conversation with the Authors of Sexual Citizens: A Landmark Study of Sex, Power, and Assault on Campus