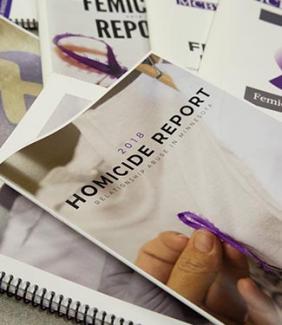 "For the last three decades, a group of women have shared a grim task: collecting the names of every victim of domestic homicide in Minnesota.

Known for years as the annual Femicide Report, it started in 1989 as a way to fill in a gap in reporting gender-bias violence against women and girls. There was no other state or national group collecting this kind of data at the time, and to this day no state agency collects comparable data.

'Every month or so a woman, and or her children, and or her partner or mother or neighbor got killed, and it was like a flash in the pan,' said Julie Tilley, who first decided to start collecting the names as a staffer at the Minnesota Coalition for Battered Women.

'One of our goals was not only to honor the victims of this horrendous violence but to make this violence visible. It was so clear to us at that time that people weren’t seeing what was happening all around us.'

The report has evolved over the last 30 years, even as the list of names grew to a total of 685 women, children and men who have been killed by an intimate partner or while intervening in a case of domestic violence.

The youngest victim was just 22 weeks old, the oldest 88. It’s inspired others to start tracking similar data: A nurse in Texas is collecting names of domestic homicide victims across the country dating back to the 1950s, and a woman from Argentina recently consulted with Tilley before starting her own list.

'You see this emergence of women across the world that are actually making the state accountable for accurate reporting,' said Jodie Roure, a professor at John Jay college in New York studying violence against women. 'To acknowledge this global epidemic of violence against women and girls.'”