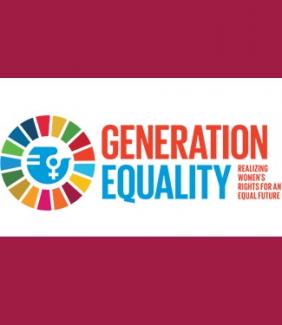 "To mark the 25th anniversary of the Beijing Declaration and Platform for Action, considered the blueprint on women’s rights and empowerment, UN Women today announced its new multigenerational campaign, 'Generation Equality: Realizing women’s rights for an equal future.'

In 2020, it will be 25 years since world leaders adopted the Beijing Declaration and Platform for Action, which set out how to remove the systemic barriers that hold women back from equal participation in all areas of life, whether in public or in private. Developed at the Fourth World Conference on Women in Beijing, China, the Beijing Declaration and Platform for Action is a visionary agenda for the empowerment of women and girls, everywhere. It was adopted by 189 governments committed to taking strategic, bold actions in 12 critical areas of concern: poverty, education and training, health, violence, armed conflict, economy, power and decision-making, institutional mechanisms, human rights, media, environment, and the girl child. Nearly 25 years later, the promise of the Beijing Platform for Action remains unfulfilled.

The Generation Equality campaign will bring together the next generations of women’s rights activists—many of whom may not have been born in 1995—with the gender equality advocates and visionaries who were instrumental in creating the Beijing Platform for Action more than two decades ago, to accelerate efforts to make gender equality and women’s rights a lived reality.

The campaign will galvanize attention and action on key issues including equal pay, equal sharing of unpaid care and domestic work, an end to sexual harassment and all forms of violence against women and girls, health-care services that respond to their needs, and their equal participation in economic and political life and decision-making in all areas of life."