Vancouver: Women's Memorial March organizers call on the public to take a stand against violence 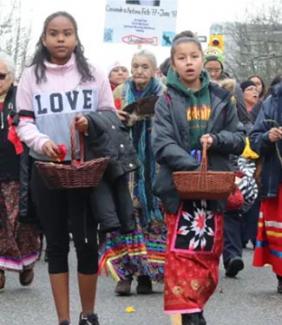 "Thousands of people filled the streets of Vancouver's Downtown Eastside on Thursday to take part in the 28th Women's Memorial March, as organizers called on the public to do its part in helping to curb violence against women.

Leading the way were three young women who spread flower petals along the streets, followed by elders who carried out ceremonies along the route at specific sites where women and girls were either last seen alive or found murdered.

...Many of those who participate in the annual march have lost a family member or friend in the neighbourhood and each year organizers publish a booklet with a list of names of women and girls who've died in the Downtown Eastside, gone missing from the area or been murdered.

This year, there are 75 new names on that list.

'This is a day of grieving, a day of mourning,' said Myrna Cranmer, one of many march organizers and the person who adds names to the list. 'Our women are being hunted.'

While the march acknowledges the deaths and disappearances of all women from the Downtown Eastside, it has been led by First Nations women from the beginning.

The march and its organizers are widely recognized for their grassroots work demanding justice for Indigenous women and girls who are disproportionately victims of violence and homicides."