What are some of the experiences and needs of intersex people in my community? 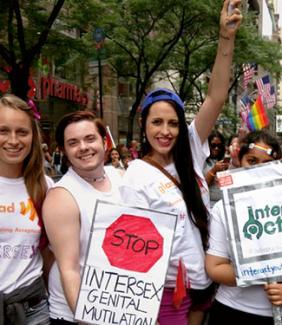 Intersex people are born with chromosomal, hormonal, gonadal, or genital variations that differ from social expectations of what male and female bodies should be like. Even as we begin or continue to challenge binary understandings of gender and sexuality in the anti-violence movements, many of us have not stopped to question the assumption that there are only two biological sexes – and anything else is not “normal” or acceptable. Social discomfort with this aspect of human diversity has resulted in discrimination and marginalization of intersex people, including medically unnecessary surgeries that they have not consented to.

While there has been a shift away from seeing intersex conditions as a problem to be dealt with medically (a practice that became popular in the medical community in the 1960s), these types of unwanted “corrective” surgeries do continue today. Adults who have experienced these medically unnecessary surgeries, also known as Intersex Genital Mutilation (IGM), experience trauma common to many adult survivors of child sexual abuse. The impact of such surgery includes shame, stigmatization, physical harm, and emotional distress. Anti-violence advocates should be prepared to provide trauma-informed care to those who have experienced trauma surrounding IGM.

As you reflect during Pride Month on your efforts to reach out to LGBTQ+ communities, consider ways you can increase your capacity to meet the needs of intersex individuals who may be dealing with trauma related to IGM.

There is great diversity of experience in the intersex community, and diverse ways intersex individuals think about community, activism, needs, and goals. There is also a wide-ranging response to whether or not intersex people should inherently be considered part of the LGBTQ+ communities. One reason that someone might take the position that intersex identity is not part of LGBTQ+ communities may be the opinion that LGBTQ+ movements have, at least in recent history, been primarily concerned with relationship recognition and concerns around identity, and not as much with bodily autonomy.

On the other hand, including intersex as part of LGBTQ+ communities can lead to more visibility of intersex experiences, and can address a common root cause of discrimination: harmful adherence to the gender binary and related gender norms. Writer and intersex advocate Hida Viloria makes this case in the article The Forgotten Vowel: How Intersex Liberation Benefits the Entire LGBTQIA Community:

“When we recognize the rights of intersex people to have their identities recognized, we dismantle the very foundation of the binary sex and gender system which has harmed LGBTQIA people for centuries.”

For more reading on this topic, check out this blog post by Viloria and another intersex activist, Dana Zzyym, which explores many of the diverse ways intersex individuals approach issues of identity.

Note the distinction between being transgender and being intersex. Being transgender has to do with having an internal understanding of one’s gender that is different than what was assigned at birth. This assignment typically has to do with the external anatomy – babies with a vagina are assigned female at birth and babies with a penis are assigned male. A transgender person has a gender identity that is different from that assignment, whether female, male, non-binary, or other genders.

Living at the Intersections

Intersex people of color are disproportionately impacted by physical, psychological, and medical violence. Historically, people of color have faced unspeakable atrocities including exploitation at the hands of the medical industrial complex. Activist Sean Saifa Wall reflected on these intersecting identities in a recent interview with NBC:

"I draw a very distinct parallel between how the medical community has inflicted violence on intersex people by violating their bodily integrity, and how state violence violates the bodily integrity of Black people… My desire for intersex liberation is totally [entwined] with Black liberation. They cannot be teased apart.” (2016)

Additionally, intersex activists and survivors of color are marginalized within the intersex movement itself – facing underrepresentation in leadership roles, lack of visibility and voice in public spaces, and limited opportunity to engage with other intersex people of color.

By honoring and lifting up the unique experiences of intersex people of color, by asking them what they need to feel heard and to feel safer in our collective spaces, we can build a more intersectional, anti-racist, trauma-informed movement. For more information, read the Statement from Intersex People of Color on the 20th Anniversary of Intersex Awareness Day and the Intersex People of Color for Justice Statement for Intersex Awareness Day (IAD) 2017, which emphasizes, "We are a just movement that has our vision set on attaining bodily autonomy for all."

The Experiences of IGM Survivors

One of the advocates in the video, Pigeon Pagonis, discloses the experience of having the clitoris removed, and later having a vaginoplasty at age 11. Pagonis makes the connection that one of the underlying reasons for these operations was to make the vagina “more accommodating to my future husband’s penis” – underscoring one example of how harmful societal assumptions about what male and female bodies should look like (and how sex should happen between men and women) forms justification for these invasive medical surgeries. One of the other advocates in this video, Hanne Gaby Odiele, helps make the connection to trauma, by claiming, “Those surgeries need to stop because they bring so much more complications and traumas.”

A 2017 report from Human Rights Watch called “I Want to Be Like Nature Made Me”: Medically Unnecessary Surgeries on Intersex Children in the US contains information on the history and impact of IGM, including insight into the trauma mentioned by Odiele in the video. In one testimonial from an adult survivor of intersex genital mutilation, Ruth, age 60, shares: “I developed PTSD and dissociative states to protect myself while they treated me like a lab rat, semi-annually putting me in a room full of white-coated male doctors, some of whom took photos of me when I was naked.” The report goes on to illustrate forms of psychological harm and emotional distress that adult survivors of intersex genital mutilation may experience.

When working with a survivor of intersex genital mutilation, consider that control was taken away from the survivor in the nonconsensual, medically unnecessary surgery. These surgeries may receive legitimacy simply because they take place in a medical context, which we tend to view as being associated with consent and authority. But the root of the perceived “need” for this surgery is embedded in social standards about what male and female bodies should look like, not medical need. We need to move away from the notion that there might be an underlying medical justification for this abusive touching (Tosh, 2013).

Working to end false binaries of sex, gender, and sexuality can be an important first step in preventing IGM and many forms of violence. Developing  an understanding of intersex peoples’ experiences by reading intersex history and listening to intersex people share their stories when offered can deepen your understanding of who is part of our communities and how we can provide trauma-informed care to everyone who needs our services. A first step can be to become familiar with intersex organizations like Intersex Society of North America, interACT, and Intersex Campaign for Equality. Another can be to educate colleagues on trauma related to IGM, and to make efforts to directly engage the community in which your agency wants to provide welcoming and relevant services to intersex people. Shifting our culture to end the shame, secrecy, exploitation, and abuse of intersex people will require broad level systemic change driven by all of us.

What can you do to positively impact the lives of intersex survivors in your community?

Human Rights Watch, interACT. (2017, July). “I Want to Be Like Nature Made Me”: Medically Unnecessary Surgeries on Intersex Children in the US. Retrieved from https://www.hrw.org/sites/default/files/report_pdf/lgbtintersex0717_web_0.pdf