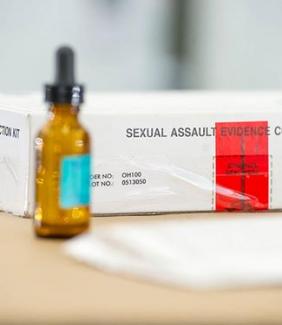 "Six years ago, a newly minted graduate of the School of the Art Institute of Chicago was working three part-time jobs and adjusting to life not as a student. She stopped in for a drink one night at a restaurant in Chicago's Bucktown neighborhood, where she got into a conversation with a guy. The next thing she remembers clearly was awakening at home the next morning, aching, covered in bruises, with a swollen lip.

She believed she had been raped and went to the local police station to file a report. The police sent her to a hospital emergency room nearby where, with her permission, a doctor did a medical forensic exam, checking her for injuries and taking evidence from her body and clothes to potentially use in a prosecution case. The exam took hours and made her even more miserable.

Police never made an arrest.

As time passed and the woman tried to move past the assault, she received regular, unwelcome reminders: bills from the hospital and emergency physicians group that treated her.

...For 25 years, the federal Violence Against Women Act has required any state that wants to be eligible for certain federal grants to certify that the state covers the cost of medical forensic exams for people who have been sexually assaulted.

Subsequent reauthorizations of the act have clarified that these individuals also can't be required to participate with law enforcement to get an exam; nor do they have to pay anything out of pocket for that exam at any point (not even if they would be reimbursed later).

And yet for some people who have been raped, the bills keep coming — despite this long-standing federal prohibition and other state laws that provide additional financial protections in many places.

'There's often a disconnect between the emergency room personnel that take care of the person and the billing department that sends out the bills,' says Jennifer Pierce-Weeks, CEO of the International Association of Forensic Nurses, professionals who have specialized training in how to evaluate and care for victims of violent crime or abuse."

White People: Reconnect to Our Spirit and Our Humanity to Interrupt White Supremacy