‘You Are Not Alone’: Supporters Break Ground On Nation’s 1st Sexual Assault Survivors Memorial In Minneapolis 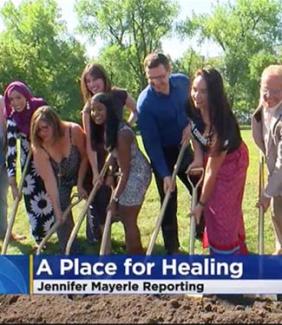 "History was made in Minneapolis as survivors and supporters broke ground on the nation’s first permanent memorial to survivors of sexual assault.

A rape survivor spearheaded the years-long project. The open space at Boom Island Park is intended to create a safe place for healing.

The Survivor’s Memorial goes so much deeper than the ceremonial dirt dug for its groundbreaking Thursday morning.

'This initiative started just weeks after my ex-boyfriend broke into my apartment and raped me,' said Sarah Super.

The victim-survivor pushed for the project after hearing from others who echoed ‘me too.’ It took four years of courage, sacrifice and fundraising to get to this day.

'This memorial is a community response to sexual violence, rape culture and injustice. It will be a place for truth-telling, a place that validates our experiences, our suffering and our courage,' Super said.

The circle of support and healing at Boom Island Park will sit along the Mississippi River with a view of downtown Minneapolis. A project the Minneapolis Park Board supported.

'We see you, we hear you, we believe you and you are not alone,' Park Board President Brad Bourn said."