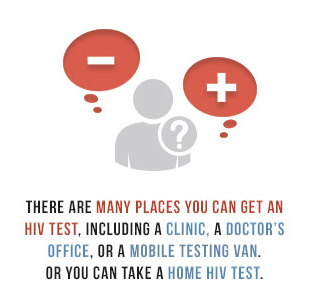 Nearly one in seven people with HIV are unaware of their infection (CDC, 2014). That’s why the Centers for Disease Control recommends that everyone between the ages of 13 and 64 get tested at least once a year and that high-risk groups get tested more often. High-risk groups include men who have sex with men, youth between the ages of 16-24, and African Americans. Although African Americans are more likely to get tested for HIV than Latinos or whites, more than a third have never been tested (CDC, 2015). HIV testing is integral in the fight to end AIDS. Early detection for those who are HIV positive helps connect them to care, leading to longer, healthier lives. The U.S. Department of Health and Human Services guidelines recommend starting treatment immediately after being diagnosed with HIV and new research (the Strategic Timing of AntiRetroviral Treatment study or START) has underscored the importance of starting treatment early (Kaiser Foundation, 2015).

HIV testing is faster and easier than it has ever been. The most common HIV test is the antibody-screening test, which tests for the antibodies that your body makes against HIV, not for HIV itself. This test can often be done within 20 minutes. This is called rapid testing. There are two types of rapid tests. One uses blood—a clinician sticks the index finger with a small needle to draw a small amount of blood. The other tests oral fluid using a mouth swab.

When getting tested, patients should expect to fill out confidential paperwork that gives consent, or permission to take the test. This paperwork may also ask about “risk behaviors.” Additionally, either a certified HIV-tester and counselor, or a nurse practitioner or doctor will talk more about what to expect.

There are two possible outcomes to this test: negative, which means the test detected no antibodies, or preliminary positive. A negative test result means that no antibodies were detected; however, false negatives may occur if the time between exposure to HIV and the time when the body starts making HIV-fighting antibodies has not occurred by testing time. This may be anywhere from 9 days to 3-6 months, depending on the person's body and on the HIV-test that's used (San Francisco AIDS Foundation). A preliminary positive result means antibodies are present, but this must be confirmed by a medical professional using a blood test (in the case of oral testing).

If a preliminary positive does occur, the counselor or medical professional conducting the test will help to connect the patient to follow-up medical care, resources and other types of support (AIDS.gov).

Self Testing: There are two approved home tests. For the HomeAccess HIV-1 Test System, an individual performs the test by pricking finger with a lancet, placing drops of blood on treated card, and mailing to lab for testing. Identification number on card is used when phoning for results; counseling and referral available by phone. Results: in as little as three days. In July 2012, the FDA approved the first rapid oral fluid test for home use – OraQuick In-Home HIV Test. Results: in as little as 20 minutes. Both home tests may be purchased from drug stores and online. - Kaiser Family Foundation