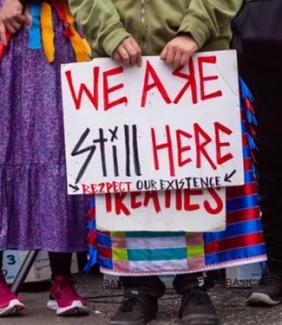 "The repeal of federally protected abortion rights would result in an increase in violence experienced by Indigenous women, girls and all those who birth, predicted the director of one of the leading research institutes on Indigenous and Alaska Native people across the US.

'The only option we have right now if this was to be overturned, is to provide the limited resources and support, but it will be limited, especially initially. As a direct result our people are going to suffer,' Abigail Echo-Hawk, director of the Urban Indian Health Institute, told the Guardian.

Her remarks followed a leaked supreme court draft opinion authored by Justice Samuel Alito that showed the country’s highest court ready to overturn Roe v Wade, the nearly 50-year-old ruling protecting the right to an abortion until a fetus is viable outside the womb. Should that decision become official, 13 states with trigger laws would immediately in effect outlaw abortions. Many other Republican-controlled states are expected to follow suit.

A 2016 National Institute of Justice study found that more than one in three Indigenous and Alaska Native women had experienced violence in the past year, including sexual violence and violence by an intimate partner. They were 1.7 times more likely than white women to be the victims of violence. They are also at an especially high risk for being trafficked, although comprehensive data is limited.

The high rates of these crimes – many of which are never reported, probably due to a mistrust in law enforcement – compounded with not being able to access legal abortions, can leave Indigenous people at an increased risk, explained Echo-Hawk.

For those in an abusive relationship, not having access to an abortion could force the victim to stay in a bad situation and lead to more violence, she said. Those being trafficked, some of whom are not allowed to use birth control, may face additional violence from their perpetrators should they become pregnant.

Indigenous and Alaska Native women along with Black women are also two to three times more likely to die as a result of their pregnancy than white women, according to the US Centers for Disease Control and Prevention (CDC)."