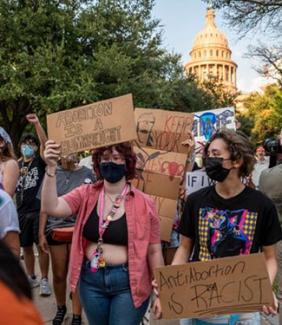 "The crisis hotline for the Dallas Area Rape Crisis Center is open all hours of the day, every day of the week. Trained volunteers answer roughly 1,800 calls per year, mostly from survivors of sexual violence, at times helping women who ask where they can talk to doctors about terminating their pregnancies.

But when the country’s most restrictive abortion ban went into effect in Texas on Wednesday, the Dallas group and other rape crisis centers across the state were immediately forced to limit the support they give to survivors of rape or incest, potentially impacting thousands of victims that both the United Nations and the World Health Organization say should have access to safe and legal abortions.

The new Texas law, titled S.B. 8, bans abortions for all individuals, including survivors of rape and incest, after the detection of a 'fetal heartbeat,' which occurs at roughly the sixth week of pregnancy. It also encourages citizens to sue abortion clinics or 'any person who knowingly engages in conduct that aids or abets the performance or inducement of an abortion' after the fetal heartbeat state.

... Now, Jones says, she has coached her staff on the careful language they need to use in responding to these calls. 'We’re not trying to be evasive with callers. We don’t want to be cryptic. We don’t want to confuse anyone,' she says. 'But we also don’t know how this is going to unfold, so we’re trying to walk that line of continuing to be a resource without getting sued.'

Several crisis centers declined to speak on the record for this article, for fear of retribution under the new law. 'Rape crisis centers are understandably alarmed and concerned about how they can continue to support a survivor and her bodily autonomy after an assault,' the Texas Association Against Sexual Assault Director of Policy and Advocacy Elizabeth Boyce said in a statement."