Native Peoples Then and Now: A Historical and Cultural Context

The Women Are Sacred movement came into fruition as a result of hundreds of years of broken treaties, discrimination, oppression and violence against Native women. The Women Are Sacred movement focuses on identifying struggles and solutions to make change and nurture a growing network of Native people and allies to end violence against native women who are battered and raped, and their children. 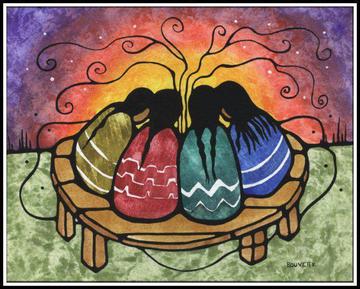 “Before the Native peoples were colonized by Europeans, Native communities were, for the most part, egalitarian; women actively participated in social, economical and political decision-makings in their daily lives.  In fact, as creators of life and the carriers of culture, they were central to the survival of their people.  Since colonization, Native women have suffered multiple oppressions including gender violence, racism and class oppression.  Until today, these oppressions are still relevant to the lives of Native women” (Indigenous Peoples Solidarity Movement Ottawa). This knowledge combined with the understanding that tribal sovereignty and native women’s sovereignty are directly tied to one another is the philosophical foundation of the culturally specific Women Are Sacred movement. The mainstream media has paid very little attention to these crimes, in comparison to the crimes on white women (Indigenous Peoples Solidarity Movement Ottawa). However, increased allyship and media exposure over the last 30 years, along with sharing stories and illuminating the impact of oppression in a unified voice, has lead to many changes.  Some of these changes include Title IX of the Violence Against Women Act (restoring jurisdiction to some tribes for qualifying domestic violence cases of non-Native perpetrators) and the Tribal Law and Order Act (opening doors to more services and exposure to ending violence against Native women and families). Please see Policy Resources for more information on these policy pieces. The voices of Native women in ending the culture of silence is expressed with the Cheyenne proverb “A nation is not conquered until the hearts of its women are on the ground.” The impact of Native women’s voices in the anti-violence movement has been instrumental in policy change and practice and in creating a better future for the next generations.

A general introduction to the social and legal issues involved in acts of violence against Native women. Sharing Our Stories of Survival explores stories and case-studies and statistics with a countervailing theme running through this extremely informative volume.

Maze of Injustice: The failure to protect Indigenous women from sexual violence in the USA, one year update

This update presents the main achievements of the past year in detail and identifies urgent priorities going forward.