Sexual violence in the military

There have been many reports on the extent of sexual violence within military settings (see Evaluation and Oversight). The problem is extensive and the impact is unavoidable. In 2004, a task force report on care for victims of sexual assault within the Department of Defense made recommendations for systematic changes to improve response to people who experience sexual violence (DoD Care for Victims of Sexual Assault Task Force Report, 2004).

Those recommendations included developing a central point of accountability and a unified response system.  Additionally, the legal requirement to participate in the military justice system was found to be a major deterrent for service members to report crimes of sexual violence.  To report a crime meant that a service member’s commander would be notified, initiating a formal investigation.  Since that report, the DoD has made many changes and federal legislation has passed to help ensure proper care for victims.  Recommendations from this task force led to new policy and the establishment of the Sexual Assault Prevention and Response Office (SAPRO) in the Pentagon, which provides oversight on all sexual assault prevention and response activities (Whitley, 2009). The Department of Veterans Affairs (VA) also incorporated major system changes to help provide treatment and benefits for those veterans who seek assistance with a history of military sexual trauma.

Military life and the experience of sexual violence pose unique challenges. Men and women who experience sexual assault or harassment often live and work with the person who committed this violence. If the perpetrator supervises or outranks the victim, they may make threats against the person’s career or shut out options for help and support. Service members do not have the option of leaving a job because of a hostile working environment, and could face charges for not following orders. Unit cohesion can make breaking that bond through reporting violence difficult, painful, and even threatening for a victim (Cater & Leach, 2011; Suris and Lind, 2008).

Some suggest that the culture of the military must change to prevent sexual assaults in the first place (Callahan, 2009). Natelson (2009) reports that sexual harassment is a common occurrence; additionally, unit cohesion can lead to pressures against reporting acts of violence (Natelson, 2009; Suris & Lind 2008). While many changes have been made, some contend that the DoD has not done enough to prevent and respond to sexual violence (Bhagwati, 2010). The sections below provide information on the extent of sexual violence within both the armed forces and military service academies. Additionally, there is a section on the experience, symptoms, and treatment for what the DoD has termed Military Sexual Trauma (MST). 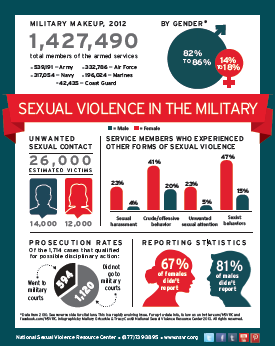 Sexual Violence in the Military: Infographic

This infographic provides a visual snapshot of the prevalence of sexual violence in the military based on data from a variety of sources dated 2010-2013.

Department of Defense Annual Report on Sexual Assault in the Military: Fiscal Year 2010

In this annual report for fiscal year 2015, the Sexual Assault Prevention and Response Office of the Department of Defense details findings, outcomes, and efforts conducted to address the issue of sexual violence within the military. Each year, SAPRO provides this report to congress to update on the advances in achieving the goals of institutionalizing prevention efforts and appropriate responses.

A research article that discusses findings of a survey of 558 women enrolled in the national VA healthcare registry. Twenty eight percent (n=151) of participants reported experiencing rape. The authors found that certain environmental factors increased the likelihood of rape, including sexual harassment and unwanted sexual advances on duty.

Rape, Sexual Assault and Sexual Harassment in the Military: The Quick Facts

This 2-page fact sheet includes information about the incidence of MST, its emotional and financial costs, and other valuable information highlighting the devastating effects of this problem.

This article describes the obstacles that female service members and veterans are faced with during deployment and when trying to reintegrate to their home communities.

The authors of this article conducted research with women from a wartime military sample to assess exposure to sexual assault and harassment and how these experiences related to the experience of post traumatic stress disorder symptoms.

This article discusses the prevalence of male soldiers assaulted while serving in the military. It also addresses the increasing number of soldiers diagnosed with Military Sexual Trauma and the rising number of reports of sexual violence in light of recent survey findings.

In this report, the outcomes of a survey intended to measure rates of sexual violence, sexist behavior, perceptions of academy culture toward sexual violence, and services available are presented.

This report provides an assessment of the US Military Academy & US Naval Academy’s ability to address sexual harassment and assault within their institutions. It provides task force recommendations on how academies can better address these issues.

This summary of information was taken from self-assessments conducted by Military Service Academies (MSA) in the school year 2015-2016, measuring the outcomes of prevention and response efforts within the military.

Military sexual trauma
Also known as MST, Military Sexual Trauma is the term used by the Department of Veterans’ Affairs to describe experiences of sexual harassment and sexual assault committed by one service member against another. The resources in this section describe MST, symptoms and experiences associated with it, and practices and programs to address it.

In Their Boots: Angie's Story

This documentary shares the experience of Sergeant Angela Peacock as she works through sexual assault, combat stress, and the trauma symptoms that followed.

This document provides the written version of testimony provided by the Executive Director of SWAN regarding the issue of Military Sexual Trauma and the experiences of individuals working within the Department of Defense and Veterans Affairs facilities and programs.

This radio interview discusses the military sexual trauma and related challenges face by a veteran who experienced sexual harassment while serving in the military. Rachel Cesar shares her story, and discusses homelessness, the pursuit of help and healing, and issues faced by women veterans specifically.

This 2-page fact sheet includes information about the incidence of MST, its emotional and financial costs and other valuable information highlighting the devastating effects of this problem.

Importantly, the Disability Compensation fact sheet points out the that fact that veterans in need of MST services from the VA do not need to have a documented MST experiences or disability compensation in order to receive these services. Even veterans who are not eligible for other services may apply, but the language provided does not indicate that services are guaranteed.

What is Military Sexual Trauma?

This article offers information to MST survivors with the intent of providing them with resources to assist them in their recovery. It was also written for partners, friends, or family members of MST survivors.

This channel offers several videos and podcasts discusses issues related to military sexual trauma, post-traumatic stress disorder, and what it is like to experience sexual violence while serving in the military.

This directive advices VA facilities on the appropriate programming and requirements for addressing MST. Of note is the directive for universal screening practices and free care for MST-related services for all veterans.

This resource briefly discusses some common responses and refers to other resources and the National Center for Post-Traumatic Stress Disorder (PTSD).