Working at the intersections of violence against women in Latin@ communities requires intentionality and a deep understanding of the lived realities of Latin@s in their cultural context. This section of the special collection focuses on subgroups within Latin@ communities with the purpose of highlighting specific strategies and approaches when responding to violence.

Acknowledging that survivors’ lives are complex as a starting point in our analysis, as well as the multiple dimensions of their identities, are critical steps towards achieving social justice for ALL. As stated by Gloria Anzaldúa, Living on borders and in margins, keeping intact one's shifting and multiple identity and integrity, is like trying to swim in a new element, an "alien" element.

In the spirit of honoring these complexities, the sections that follow explore some of the dimensions that could make up the identities of Latin@ survivors and their allies.

Working with men to end violence against women
In the last decade, engaging men as allies to end violence against women has become an important component of almost any prevention strategy around the world. In recognition of this, Casa de Esperanza has developed a toolkit with various resources for Latino men who want to be involved in this effort, both individually and as community organizers. The toolkit includes original materials to create a local awareness campaign, as well as a curated collection of key resources from other organizations who have been engaging Latino men both in the US and in Latin America.

Working with Men and Boys to End Domestic Violence

This position paper delineates the principles with Alianza employs in its efforts to engage men in prevention programming, based on the belief that the eradication of domestic violence requires the ongoing and committed participation of all genders.

Promotores from the Entre Amigos group starred in the bilingual video "50 Messages 50 Faces" as part of their on-going campaign to challenge social norms that perpetuate violence against women.

Engaging Men to End Violence in Our Communities

This webinar presents strategies and practical tools to involve men in ending domestic and sexual violence. It includes an analysis on the rationale behind engaging non-abusive men to join the movement to end violence against women; it will explores the different roles that men can play as part of this movement; it will propose a strength-based, holistic framework to work with men; and will offer practical examples of strategies and approaches of engagement.

Latin@ Youth as Agents of Change
Young people are some of our most powerful agents of change in domestic violence prevention and intervention. Youth and young adults often straddle the line between childhood and adulthood with tremendous resiliency and tenacity. As many young people begin to explore what having a relationship means, they want to learn about healthy relationships and engage in preventing and ending domestic violence and sexual assault. This section of the collection includes tools to effectively engage Latin@ youth in responding to teen dating violence that includes prevention and intervention strategies from culturally specific perspectives.

Casa de Esperanza's Community Initiatives Manager discusses youth peer education as one strategy to prevent domestic and teen dating violence, explaining how the organization trains young Latinos, who in turn, facilitate workshops for their peers on topics they deem important. Lumarie stresses the importance of creating opportunities for young people to have caring relationships with adults as well as the importance of making space for young people to take action to create positive social change.

For My Mother: Latin@ Youth Letters on Family, Relationships and Violence

This study explored the reality of Latin@ youths lives utilizing the format of a letter to their mothers. The findings highlight the complex realities of Latin@ youth lives in the context of domestic violence.

This brochure includes information from the parents’ perspective in their efforts to raise healthy and happy daughters. Available in English and Spanish.

You Only Live Once

This poster was developed from ideas generated by Latino youth from Enlace Comunitario in Albuquerque, NM. It was used as an awareness tool to end teen dating violence. ​

This fact sheet includes statistics and other useful information to assist the reader in understanding this issue as it relates to Latin@ youth.

"Why are Mami y Papi Fighting?" Latino Youths Perceptions of Why Parents Fight

This research poster includes the findings from a study that focused on learning about what Latino/a youth believe are the reasons for their parents fights.

This is a conversation with Latino Peer Youth Educators from Casa de Esperanza and Raul Sanchez, a member of the executive committee and youth advisory board from loveisrespect. These young leaders discuss healthy relationships and what you can do in your communities to prevent and respond to teen dating violence.​

Latin@ Older Adult Survivors
Latin@ seniors currently represent 7% of the U.S. older adult population, and by the year 2050, they will make up 20% of the nation’s older adults (Administration on Aging, 2010). Latin@ seniors are the fastest growing segment of the U.S. aging population. Although Latin@ older adults live about 2 and a half years more than non-Latin@ white seniors, they don’t necessarily live better. They face several barriers that impact important aspects of their lives, including: lack of food and economic security, lack of access to quality health care, and challenges related to educational attainment. These barriers and certain other factors heighten their risk to experience elder abuse. 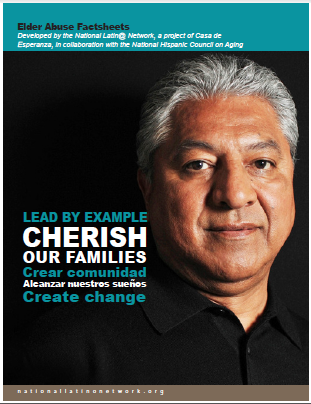 This resource packet was developed for the Women of Color Network Leadership Academy and includes factsheets, safety planning tips, technology safety considerations and other tools relevant in responding to or preventing abuse in later life.

This document contains facts about how elder abuse impacts Latin@ communities and the importance of addressing these complex issues in a comprehensive way in order to reduce barriers and build upon community strengths.

Working together to end Abuse in Later Life in Latino Communities

The abuse of older adults is a common problem in our society, but rarely discussed. This is particularly challenging because victims/survivors of elder abuse are often an invisible population across cultures, gender, immigration status, etc. In this webinar, presenters discuss the specific and unique needs of Latino victims of elder abuse as this group is especially underrepresented in research and practice. Best approaches for bridging this gap as well as examples of successful collaborations to address this problem are highlighted in this webinar.

Latin@ LGBTQ Individuals
The intersection of violence in Latin@ LGBTQ communities is a topic rarely addressed. There are multiple layers of oppression affecting Latin@ LGBTQ survivors of intimate partner violence and seeking help or support can prove extremely challenging for these individuals. Issues related to internalized homophobia, societal barriers including subtle or blatant discrimination by service providers, law enforcement and others add to the challenges experienced by Latin@ survivors in same sex relationships. Additionally, immigration laws and anti-immigrant sentiments as well as language access issues provide additional challenges to this already complex dynamic. Regarding Latin@s in particular, there are many cultural aspects that often play an important role in the decisions to report intimate partner violence or whether to leave or remain in an abusive relationship. The key role that family plays as part of the identity of many Latin@s is a cultural value that, although celebrated, at times can have a serious impact on the decision to disclose one’s sexual orientation. Religion and/or spirituality also play a critical role and many individuals have to weigh much more than the violence alone before deciding to come forward. The impact of gender role expectations and their close connection to cultural traditions adds, in many cases, an additional layer of challenges for Latin@ LGBTQ survivors. While there are many useful tools that raise awareness about IPV in the LGBTQ community, the majority to date do not include a cultural analysis when discussing this issue.

A Tool for Reflection: The Realities and Internalized Oppression Faced by Lesbians of Color

This 3-page document explores the elements that impact the identity of Latin@ Lesbians and provides additional information to facilitate discussion after watching the video "My Girlfriend Did It."

In 2006 the board of directors of Amigas Latinas initiated the Proyecto Latina: Descubriéndonos survey project in order to document and make known the unique experiences and challenges that Latina LGBTQQ women face in Metropolitan Chicago. This report documents the key findings from the project.

Dying To Be A Woman/Morir por ser Mujer

This video provides details about the dangers that transwomen face when transitioning without adequate medical support. It also shares the graphic details of the death of a Latin@ transwoman highlighting the devastating impact of transphobia. This video was produced by the TransLatin@ Coalition, an organization that advocates for the specific needs of Trans Latin@ immigrants who reside in U.S. and plan advocacy strategies that would improve their quality of life. This video can be ordered free of charge on the TransLatin@ Coalition's website: translatinacoalition.org

De Colores is a bilingual 28-minutes documentary about how Latino families are replacing the deep roots of homophobia with the even deeper roots of love and tolerance. Through moving personal stories we learn about how families are breaking cultural barriers and how love always prevails.

Injustice at Every Turn: A Report of the National Transgender Discrimination Survey

This report provides a summary of the National Transgender Discrimination Survey, including the prevalence and experience of sexual violence, in addition to many other forms of discrimination and hate crimes against transgender individuals. Included in addition to the full report are regional and state reports, as well as community-specific reports, which highlight increased rates of violence and harassment against communities of color.

This blog written by queer Latin@ activist Julio Salgado, exposes the challenges faced by queer undocumented students and the dangers of deportation for many of them. Salgado explains the homophobic climate in many countries where non-heterosexual orientation is often times punished with death.

Supporting and Caring for Our Latino LGBT Youth

This report explores the experiences of 1,937 LGBT youth who identified as Latin@, many of which live at home with their families. Respondents described their lives at home and at school.

Talking about LGBT Equality Among Latinos and Hispanics

This report includes the findings from a research study that confirmed the strength of Latin@ support for LGBT issues, and uncovered approaches that can further even greater understanding and acceptance.

Julio Salgado is a gay Mexican-born artist. Through the use of art Salgado has become a well-known activist within the DREAM Act movement. Salgado uses his art to empower undocumented and queer people by telling their story and putting a human face to the issue. He has worked on various art projects that address anti-immigrant discourse, the issues of what it means to be undocumented, and what it means to be undocuqueer.

This webinar focuses on the intersections of homophobia, heterosexism and racism that often enhance negative stereotypes associated with being Latino and LGBT. The presenter discusses the impact of language on our anti-oppression work as well as other elements that complicate the experiences of victimization of members of the Latino LGBT communities.