The documents included in this section provide information about legal provisions, mainly immigration provisions in the Violence Against Women Act (VAWA), immigration laws, and international laws that offer protection and assistance to immigrant survivors of domestic violence. Please note that some of the documents in this section may become dated over time because laws and regulations tend to change. For current resources, please consult the expert organizations listed at the end of this collection.

"In the U.S., victims of crime, regardless of their immigration or citizenship status, can access help from law enforcement or the courts, as well as help provided by government or non-governmental agencies, which may include counseling, interpreters, safety planning, emergency housing and possibly monetary assistance" (U.S. Citizenship and Immigration Services). 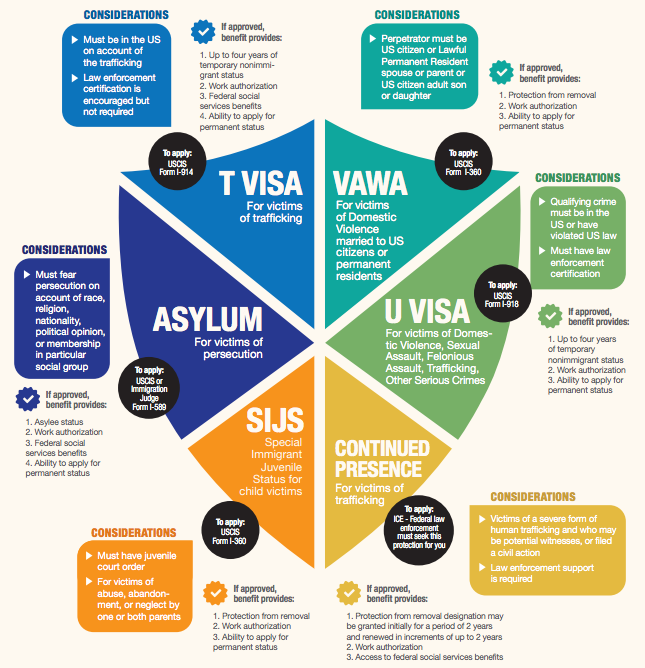 Violence Against Women Act (VAWA)
The Violence Against Women Act of 1994 (reauthorized in 2000, 2005, and 2013) is federal legislation that includes special protections that enable immigrant victims of domestic violence, sexual assault, dating violence, and stalking to seek immigration relief. Immigrant survivors who have been able to access these protections may also be eligible for some forms of public assistance.

"While these immigration remedies can provide a critical pathway to safety for many immigrant survivors, the reality is that most immigrant victims of domestic violence, sexual assault, stalking, and trafficking are unable to learn about their rights and access these protections unless they are able to obtain the assistance of a trained advocate, as well as additional supportive services that are trauma-informed and linguistically accessible. Therefore, domestic violence and sexual assault service providers play a critical role in providing a life-changing bridge to safety and well-being for immigrant survivors and their children" (Hidalgo, 2017).

This infographic produced by the U.S. Department of Homeland Security offers an overview of crime victim based legal protections for adult and child immigrant victims. It covers immigration relief for victims who suffer victimization in the U.S. and/or abroad.

VAWA 2013 and TVPRA: What Practitioners Need to Know

The Violence Against Women Reauthorization Act of 2013 (VAWA 2013), combined with the Trafficking Victims Protection Reauthorization Act (TVPRA), was signed into law on March 7, 2013. This practice advisory provides an overview of substantive changes and technical fixes both in VAWA and TVPRA as well as practice pointers for attorneys and advocates on how to work with these new changes.

Factsheet: The Violence Against Women Act

This article presents an overview of the history of legal protections for immigrant women who experience domestic violence in the United States. The document notes legal amendments since 1990 that reflect an increased understanding of the danger of domestic violence to the society as a whole and to individual survivors.

This document provides an overview of the resources available for immigrant survivors of violent crimes.

Immigration Relief for Victims of Abuse and Domestic Violence

This Handbook outlines immigration remedies for non-citizen victims of domestic violence and sexual assault. It is intended to aid attorneys who typically practice family law and have experience working with domestic violence victims. The Handbook hopes to aid such practitioners in expanding their services to those victims who also need legal help with their immigration issues.

This PowerPoint presentation offers an overview of the U-Visa, T-Visa, and VAWA self-petitioning process for survivors of violence who don't have legal immigration status.

Comparing Forms of Immigration Relief for Immigrant Victims of Crime

This chart is a basic outline of various forms of immigration relief available to immigrant crime victims including domestic violence, sexual assault and trafficking victims.
U visa
The U visa was created by Congress during the reauthorization of VAWA in 2000. It is an immigration remedy that can be sought by victims of certain crimes, including domestic violence and sexual assault, who are currently assisting, previously assisted, or are willing to assist law enforcement in the investigation or prosecution of a designated crime. It provides a non-immigrant visa for qualified victims to reside in the United States for four years and the opportunity to apply for Legal Permanent Residency after three years as a U visa holder.

U Visa for Crime Victims

This page provides information about U visa, including what this visa is, who can be its principal applicants, grounds for inadmissibility, and costs for its application.

These checklists are designed to assist attorneys and advocates prepare for a variety of legal cases on behalf of immigrant survivors.

Introduction to U visa consular processes

This powerpoint presents information about processing U visa overseas, challenges involved in the process, and strategies to address the challenges.

The Department of Homeland Security (DHS) provides this guidance to federal, state, local, tribal and territorial law enforcement officers. This public guidance primarily concerns law enforcement certifications for U nonimmigrant status, also known as U visas. The U visa is an immigration benefit that can be sought by victims of certain crimes who are currently assisting or have previously assisted law enforcement in the investigation or prosecution of a crime, or who are likely to be helpful in the investigation or prosecution of criminal activity.

This manual is intended to provide information about and guidance on representing immigrant crime victims, including survivors of domestic violence, who qualify for the “U visa.”

This resource guide explains the eligibility and benefits of a U and T Visa and the role that law enforcement or other agencies may have in the issuance of certifications.

Comparing Forms of Immigration Relief for Immigrant Victims of Crime

This chart is a basic outline of various forms of immigration relief available to immigrant crime victims including domestic violence, sexual assault and trafficking victims.
VAWA Confidentiality
Abusers often attempt to exert power and control over immigrant victims by trying to undermine the victims' ability to seek VAWA immigration protections, or by trying to trigger immigration enforcement actions against the victim, or track them using the immigration system. In response, Congress created federal VAWA confidentiality laws in order to provide protections for immigrant survivors submitting an application for a VAWA self-petition, U visa, or T visa. Federal VAWA confidentiality was designed to protect against disclosure of information about these cases to an abuser or to an unauthorized third party, and to prevent the Department of Homeland Security (DHS) from relying solely on information provided by the perpetrator or their family members. It also limits DHS enforcement activities against immigrant survivors at certain protected locations.

VAWA Confidentiality and Protections for Immigrant Victims of Domestic Violence

This webinar provides information to judges and court staff about how state court proceedings and federal VAWA confidentiality protections intersect.

These FAQs are intended to address confidentiality and due process protections afforded to victim advocacy organizations and victims themselves.
International Laws

Representing Battered Respondents Under The Hague Convention on the Civil Aspects of International Child Abduction: A Practice Guide for Attorneys and Domestic Violence Victim Advocates

This Guide is intended to assist attorneys and domestic violence victim advocates in their representation and work with battered mother respondents in the United States in cases filed under the Hague Convention on the Civil Aspects of International Child Abduction.